An adult male platypus is around 50cm long and 1kg-2.2kg in weight. The female is smaller at 45cm about 0.7-2kg in weight. The duck-like bill is covered in bluish, leathery skin and the fur is a velvety dark brown velvety on the back and creamy yellow underneath. The species has webbed feet to assist with their aquatic lifestyle. The species is crepuscular meaning they are most active in the early morning or late afternoon, but this may vary somewhat depending on season, temperature, etc. There have been reports of combat between individual platypus suggesting they may be territorial in specific areas. An important element of their behaviour is meticulous grooming; this mainly occurs on a log or rock or sometimes in the water. The male platypus has a spur on the inside of its hind leg which is its only defence. The spur contains venom that can cause a painful, although not fatal, injury. The platypus along with the echidna are the only monotremes (egg-laying mammals) in the world.

When not fossicking in a stream or river, the platypus spends the rest of its time in a short, simple burrow in the side of the bank often under a tangle of tree roots. The entrance is about one to two metres above water level. It is usually distinguishable from other holes in the riverbanks by its characteristically oval section and it may be double ended.

Much of the diet includes adult and larval invertebrates such as worms, yabbies, and insect larvae but it occasionally eats small vertebrates. The smaller prey is sifted from the mud, silt and gravel in the bottom of their habitats using electro-magnetic receptors in the bill.

The female platypus makes a second burrow for nesting. It may be up to 20m long. When the female enters the burrow to lay her eggs, she blocks the burrow every few metres to keep out floods and predators and to retain heat. The female lays 2-3 white eggs in a nest consisting of dry grass and leaves. The eggs hatch after two weeks. The young remain in the nest for four months emerging in December or January. At that time, they are about 30cm long. 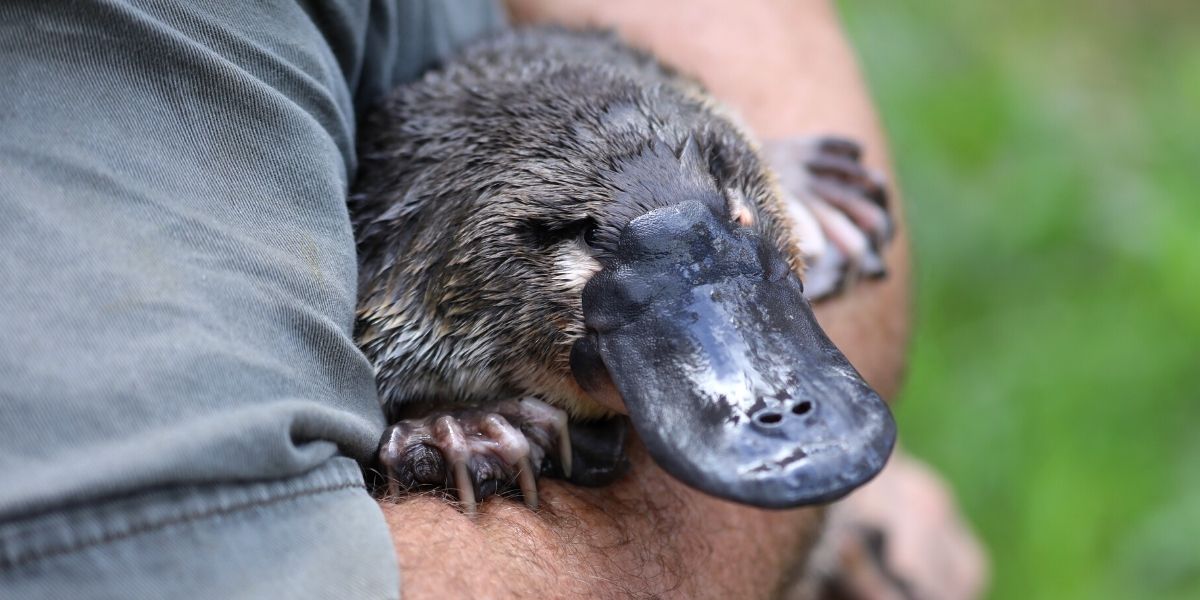