Galapagos tortoises may reach a maximum shell length of over a metre and weigh up to 180 kg in weight. There are some 14 distinct subspecies inhabiting different islands in the Galapagos Island archipelago. The shape of the shell varies quite markedly between the subspecies. Some are domed, some are flat, others have a raised area above the neck. The latter feature is thought to be an adaptation to allow the tortoises to browse on the lower branches of trees and shrubs. The colour of the shell is dark greyish-brown. They have large, strong legs and are quite capable of climbing over quite large rocks.

Galapagos tortoises are restricted to the Galapagos Islands, some 900km west of Ecuador off the South American coast. Each island has its own distinct subspecies, however, some of these have already been exterminated by people taking them for food and the effects of introduced animals such as goats destroying the native vegetation. The islands are volcanic and sparsely vegetated. Galapagos tortoises spend much of their time resting in mud wallows and waterholes. This keeps the reptile cool while also assisting to support its great bulk. They will migrate to the moist, cooler highlands during the hot, dry season and move back to the lowlands during the rainy weather.

Galapagos tortoises will eat almost any green vegetation they can find. Most of their diet consists of fibrous vegetation such as grass, tree bark and cacti. In captivity the tortoises will eat carrots, bamboo stalks, hibiscus leaves and flowers, Lucerne hay and other foods that are high in fibre.

To mate, males simply overpower females, immobilizing them with their weight. Breeding usually occurs between January and June. Between 2 to 20 eggs are laid, which are almost the size of a tennis ball. After covering the nest, the eggs are left to incubate for 4 to 8 months by the female. The temperature of the nest determines how long the incubation will take as well as the sex of the offspring. Lower temperatures tend to produce more males. The young tortoises usually hatch between November and April. 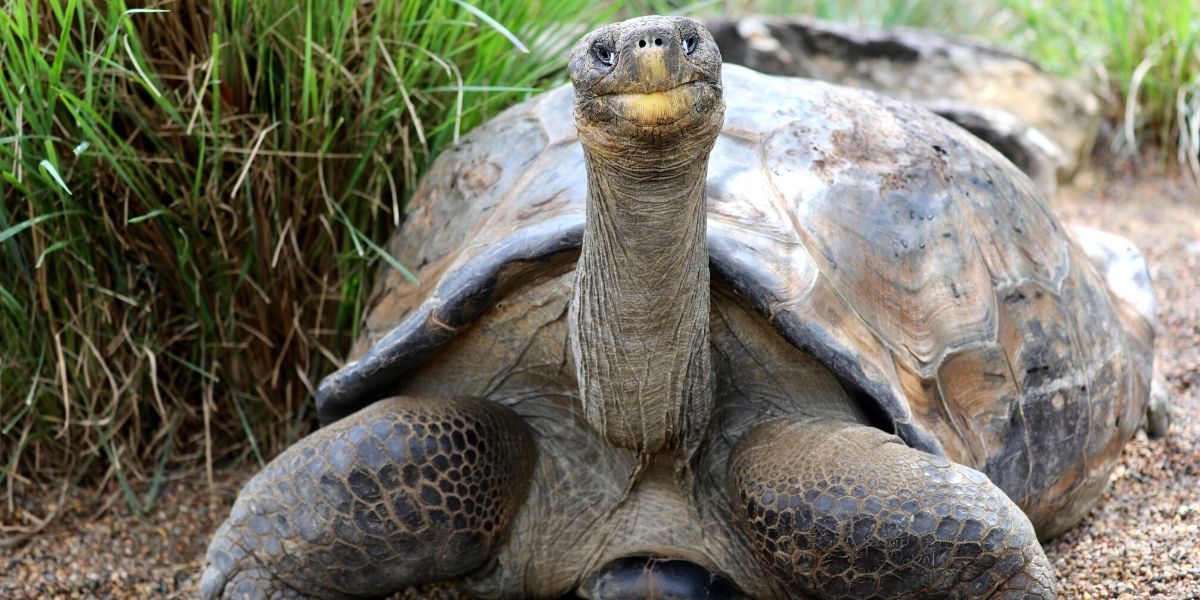 Hugo the Galapagos tortoise is the oldest animal to live at the Australian Reptile Park and he’s expected to live well past 150! He was born in 1950 and arrived at the Park in 1963. He comes out into the Main Park Area on daily walks to meet visitors and his favourite food is sweet potato! 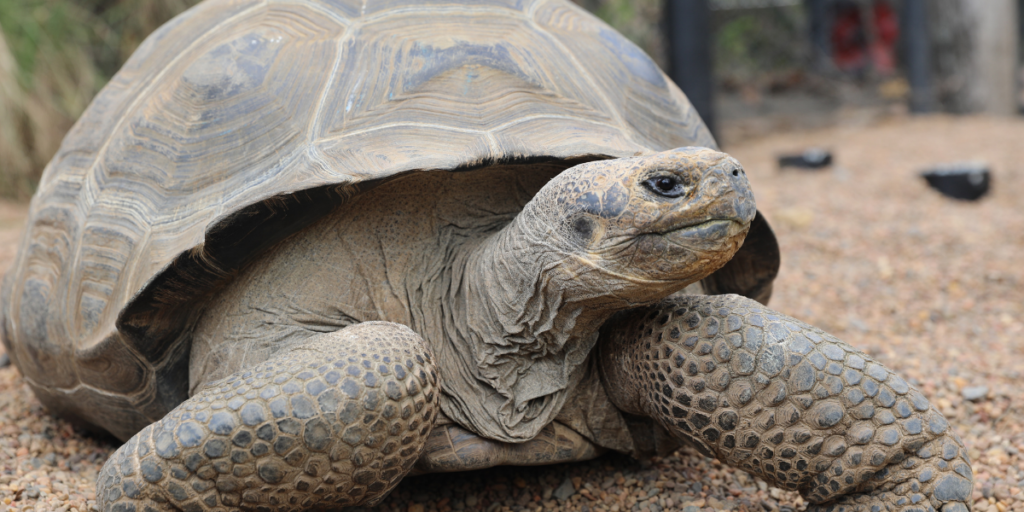 Estrella is the first Galapagos tortoise to arrive in Australia in over 40 years! She flew over to Australia, all the way from Rostock Zoo in Germany.  After meeting Hugo on Tinder in 2019, they’re now happily together. Every now and then you’ll also see Estrella munching on her favourite flower, hibiscus!

Hugo the giant Galapagos tortoise is one of the stars of the Australian Reptile Park. As he goes on his daily walk around the Park, say hello and rub his shell for luck!