The quokka is a small macropod (same family as kangaroos and wallabies) about the size of a domestic cat. It is a marsupial and just like other marsupials in the macropod family, the quokka is herbivorous and mainly nocturnal. The quokka weighs 2.5-5kgs and is 40-54cm long with a 25-30cmlong tail. It has a stocky build, rounded ears, and a short, broad head. Although looking rather like a very small kangaroo, it can climb small trees and shrubs. Its coarse fur is a grizzled brown colour, fading to buff underneath. The quokka has little fear of humans and it is common for it to approach humans closely, particularly on Rottnest Island which is seen with the “Quokka selfie” viral internet sensation. It is, however, illegal for members of the public to handle the animals in any way on Rottnest Island. Their movements resemble a bounding gait interspersed with hopping and they are able to climb trees to reach a food source. Quokkas are most active at night feeding alone or in small groups and they can survive for long periods without food or water if need be.

Mainland populations tend to be clustered around dense streamside vegetation but can also be found in shrubland and heath areas, particularly around swamps. They are restricted to the south west region of Western Australia and are found on the mainland as well as on Rottnest Island and Bald Island. Their presence on the mainland has declined severely in the twentieth century mainly because of feral predators like the fox and feral cats. Quokkas prefer a warm climate but are adapted to the seasonal variations on Rottnest Island. The quokka was one of the first Australian mammals seen by Europeans. The Dutch mariner Samuel Volckertzoon wrote of sighting “a wild cat” on Rottnest Island in 1658. In 1696, Willem de Vlamingh mistook them for giant rats and named the island “Rotte nest”, which comes from the Dutch word rattennest meaning “rat nest”.

Quokkas eat many types of vegetation, including grasses and leaves. A study found that flowering plants of the genus Guichenotia are one of the quokka’s favourite foods

Quokkas are able to breed from about eighteen months of age. After a month of gestation, females give birth to a baby called a joey. Females can give birth twice a year. The joey lives in its mother’s pouch for six months. Once it leaves the pouch, the joey relies on its mother for milk for twomore months. At 1.5 years old, quokkas are old enough to have their own babies 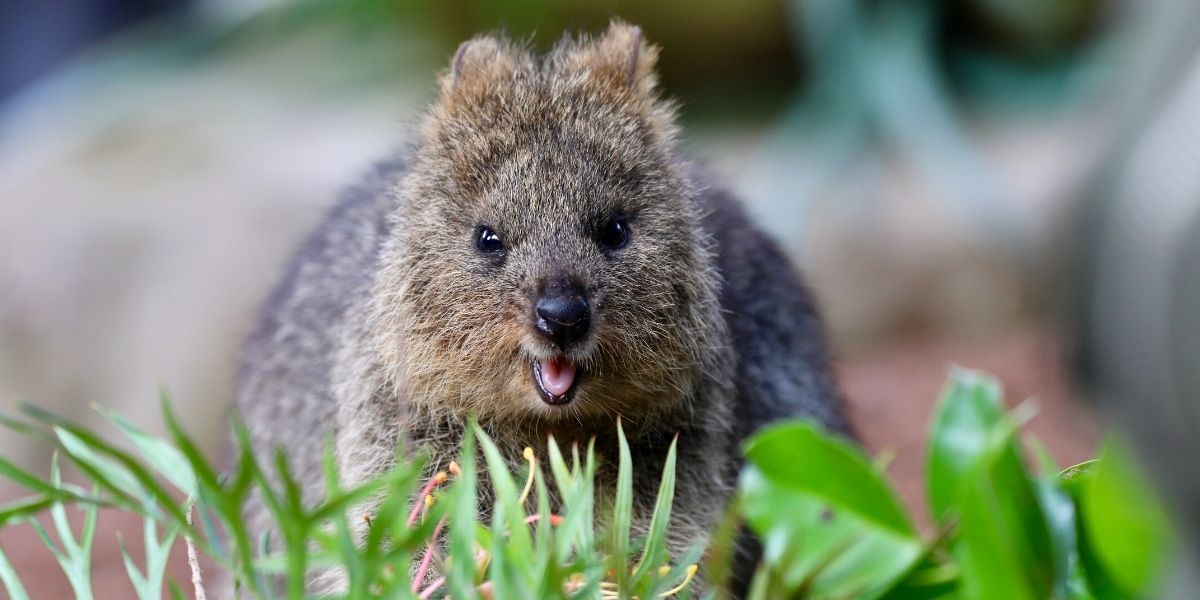