With its webbed feet and muscular tail flattened on both sides, the saltwater crocodile (popularly referred to as the ‘salty’) is able to propel itself through the water at surprising speed. The eyes and nostrils are on top of their head, allowing it to remain mostly hidden beneath the surface of the water, yet and still able to see, hear, smell, and of course, breath. When diving muscles constrict the nostrils and the throat can be closed off with a large fleshy flap of skin. There are many fanciful stories of crocodiles exceeding eight to nine metres in length, the reality is that few if any stories of crocodiles reaching even 6m can be substantiated with solid evidence. The biggest crocodiles to have been accurately measured in recent years are all under 5.5m in length.

Saltwater crocodiles can be distinguished from the only other crocodile that inhabits Australia – the freshwater crocodile (Crocodylus johnstoni) by the larger size and bulk and the snout which is more rounded than the elongate jaws of the ‘freshie’. The mouth contains between 40-60 large teeth designed to rip flesh off their prey, as the food is swallowed whole. Stones are ingested from time to time and held in the stomach to assist with breaking the food down for digestion. Salties typically remain motionless for very long periods, and owing to their camouflaged colour pattern, are often mistaken for a partially submerged log.

When surprised or lunging out of the water to catch prey, a crocodile can move alarmingly fast. Speeds of around 18 kilometres per hour can be reached over short distances, however, they are slow and cumbersome on land and would have problems keeping up with even a jogging human.

They inhabit the mangrove swamps, coastal marshes, and river mouths, around the top of Western Australia, the Northern Territory and Queensland. They will travel as far up stream as they can swim, often taking advantage of seasonal floods to access areas which are normally too difficult to reach. Saltwater crocodiles are also quite capable of living in the open ocean for periods of time and will cross large expanses of water to reach new areas. This dispersal ability means they are widespread in south-east Asia, New Guinea and some of the Pacific Islands.

Saltwater crocodiles are strictly carnivorous. Fish, birds, and mammals that venture near the water’s edge are all eaten. The adult crocodiles will eat almost anything that comes too close. Younger crocodiles will eat smaller fish and insects. Other animals also eaten, such include wallabies, water buffalo, cattle, flying foxes, crabs and turtles. Humans are not a regular part of a large crocodile’s diet but a person at the water’s edge washing dishes or having a drink looks very similar in a crocodile’s eyes to any other mammal and is thus treated as a potential food item. Crocodile attacks only take place because people disregard the dangers associated with our northern waterways, a little common sense will ensure such incidents do not occur.

The female lays around 50 eggs in a small nest of decomposing vegetation above the flood line during the wet season. The female will keep watch over the eggs for the incubation period, usually about 12 weeks. After hatching she will assist the young to reach the water and will stand guard over them until they disperse over the following few weeks. 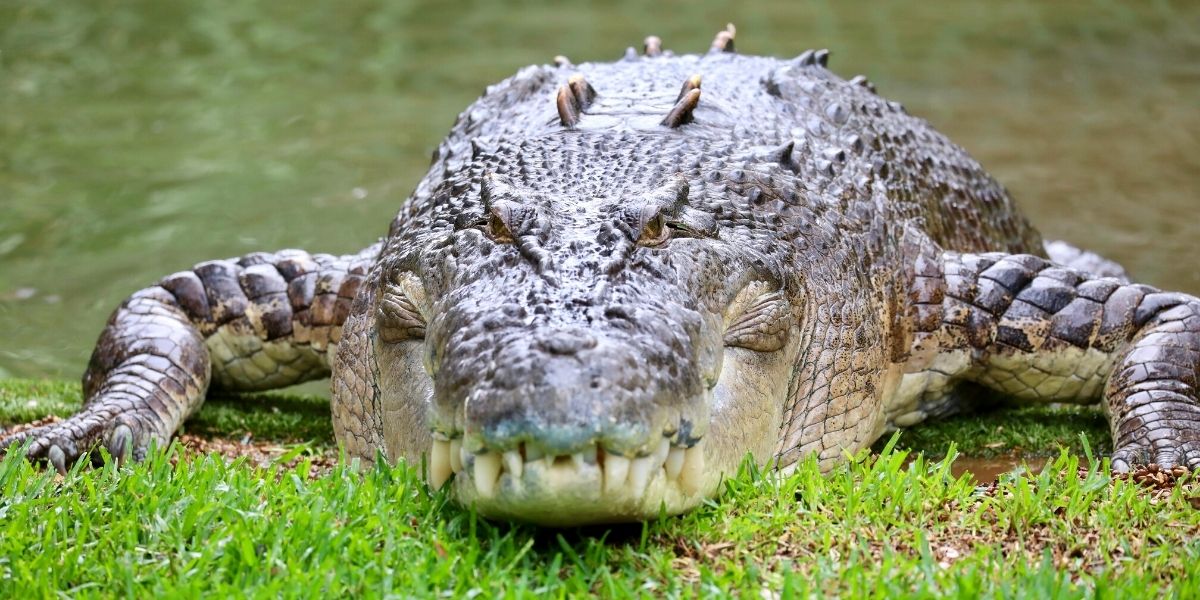 Arguably the most famous resident at the Australian Reptile Park, Elvis the crocodile has been given the title of “Australia’s Crankiest Crocodile” after stealing a lawn mower off his keepers in 2011. He measures in at just under 5 metres long, making him one of the biggest in captivity.

Elvis came to the Australian Reptile Park from the Northern Territory where he was wreaking havoc on fisherman’s boats.  He has a reputation for keeping staff on their toes, so the process of giving him such a large carcass needs to be cautiously thought out.

Elvis the crocodile is an ambassador for his species and one of the most popular animals that reside at the Australian Reptile Park.