The Torresian imperial pigeon is a large plump pigeon, 38-44cm in length and with a 45cm wingspan. It is entirely white or pale cream, apart from the black flight feathers, part of the tail (rectrices) and spots on the undertail coverts. The head can be brown, soiled by eating fruit.

The species is found in forest, woodland, savanna, mangrove and scrub in Australia (north-east Western Australia, north Northern Territory and north Queensland, including the Torres Strait Islands) and New Guinea.

This is an arboreal dove, feeding almost exclusively on fruit. It can swallow fruits with very large seeds, the latter being regurgitated or excreted whole, depending on size, after the pulp has been removed.

It builds an untidy stick nest in a tree, usually a coconut palm and lays a single white egg, which hatches within 26 to 28 days. The squab fledges after another three weeks. In Australia they breed between August and January in mangroves, vines, palm fronds on offshore islands, such as the Brook Islands. 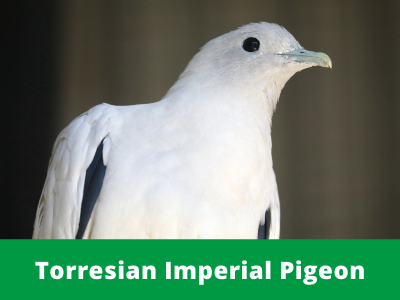